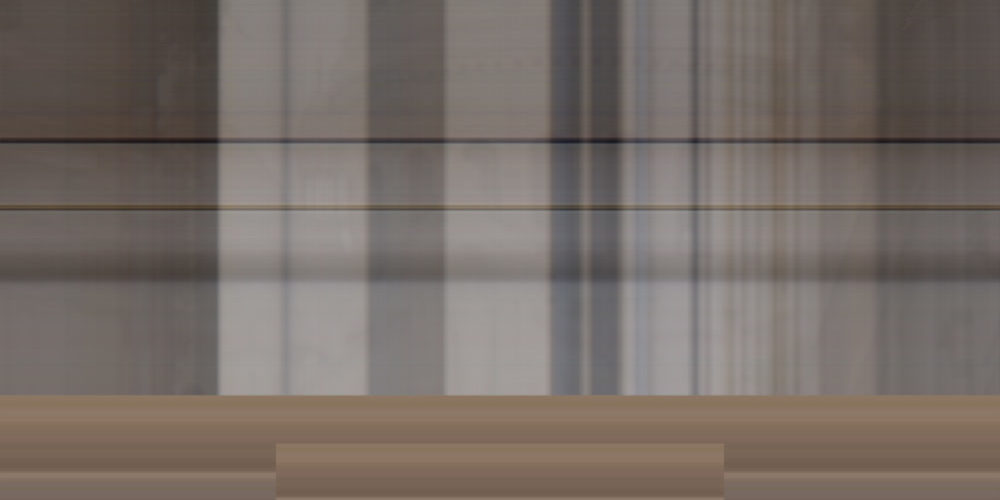 Travelling is again brought to the artistic scene as a recurrence, although in this case it is only the transcription of a memory. Far from those hiker painters who enjoyed the arrival of a changing light in the mountains or by the sea, Antonio Navarro (Creon, Bordeaux, 1966) tries to recover and recreate moments through the skillful management of stamping techniques. In this way, his work deepens on what is observed by composing a substantial pattern of pieces with which he demonstrates that the only remaining thing is colour. Therefore, his prints become landscapes of a memory. His paintings are somehow a subtle continuation of the discourse already initiated in the past by painters such as the Dubliner Sean Scully or the Latvian Mark Rothko, true references in Antonio’s artistic imagery. In a certain way, our artist pursues this path of geometric abstraction materialized in beautiful planes of subtle ranges that he places before the viewer by reducing weight and importance to the events which created those same landscapes, condensing and lightening their story, reduced to fringes of colour. The author conceives the landscape only as something substantiated. Something similar to which Luis Fernandez achieved with his delicate French countryside, which made up in his previous version drawn with only a few lines, just and necessary.
Inspired by the reading of French anthropologist and sociologist David Le Breton’s work (Le Mans, 1953), who speaks of the landscape according to the point of view of an en route motorist, Navarro, with a nomadic life between Salamanca and Asturias, fills his retinas of colour and the outcome is an undetermined geographical landscape. Likewise, his compositions are the resumption of a discourse developed throughout the last century’s field of painting.
Seduced by the vedute appearing along his vital itinerary, but only of those existing in that state of movement, he is not interested in stopping, but to extend everything that happens as he moves, necessarily ephemeral.
Chromatic ranges, bathed by changing lights, follow each other in a plane and order exclusively present in that situation. He is far from the nineteenth-century romantic traveller, in which they would have contemplated and dreamed of being quiet and stopped for the sake of his inalienable search for freedom. In spite of this, both cases are filled with emotion, which is transferred to the viewer when they are appreciated and reflected as a whole in the exhibition hall, now converted into a kind of cabin or rather a room, a restricted area of ​​access for any emotional implications are displayed.
Endowed with a great emotional capacity and therefore of the necessary lyricism, the artist offers a revision of the landscape genre in which he has been working, apart from other issues, for a few years. His artwork is very personal and profound, and that is evident when taking a closer look. They are not pictures painted under the guideline of a landscape chair. Instead, in order to contain those emotions in an artistic medium, the author makes use of his proven mastery of digital stamping.
In the titles of the different series which join the pieces, he refers to places like Paris, but obviously we do not see the city recognized by its architectural heritage or its history, but rather its chromatic and luminous essence.
In the fleeting set that is now exhibited, predominantly there are geometric patterns of impeccable finishings, molded only by the light of the places where they were viewed. Through these abstractions, often beautiful symphonies, there are blurred architectures only constructed through colour, without recognizable shapes. Another series named ‘Oriente’ (East) includes some pictures of tighter lines.
An interesting print dedicated to the city of Gijón sums up its lights and silhouette in a more spaced and figurative panorama where lines separate horizon, land and sea at the same time. Equally beautiful is his vision of the ‘Océano Mar’ (Sea Ocean), in cool but elegant harmony of blues and grays.
Some of his proposals even take the form of Triptychs, without any door grills and provide striking transparencies, which remind us how precisely the landscape was born at the bottom of Medieval boards, from where gradually they gain weight, and grow in space and consideration.
Other of his works enrich his chromatic range due to the season in which they happen and also give title to several patterned compositions: ‘Otoño’ (Autumn), where the nature is spoiled and dies.
Finally, much more blessed by the whites, the ‘Landscape’ series emphasizes the horizontality of formats that are similar to musical manuscripts, where the coloratura would be the only protagonist.