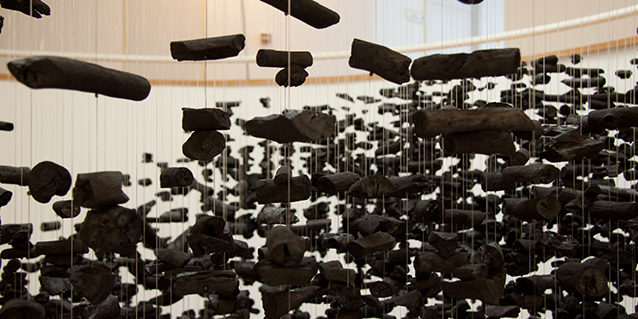 A huge white space is a silence.

In music, the silence of a minim rest is blank, and it means the equivalent of silence.

During that time no sound is produced.

Antonio Navarro manages to take to the top that elegant and deep silence in each and every one of his works.

We find it in those reflective pauses that do not contain any noise,

inevitably becoming an intense feeling when we contemplate them, for pure silence does not exist inside them.

A space in black is a silence.

In music, the silence of a crotchet rest is black, and it means the equivalent of silence.

It lasts the length of a pulsation; but without a sound.

Black, as the absence of light, as well as maximum light, is the colour from which you cannot escape.

Antonio, with his impeccable technique, makes the deepest black multiply and pass through a rainbow of infinite nuances.

The non-colour in it leads us irreducibly to a state of contemplation and stillness where an immense space is created between emotion and that space.

His works bear lightly the weight of mystery, becoming reverential, entering into a state of mystic contemplation and mindfulness that we only manage to escape from it when that same silence ends.

A silence which transforms the viewer by touching their soul.

His honesty and integrity in the use of materials, together with an exquisite technique, make him distinctive.

Impeccable usage of silicon carbide powder, carborundum, which he has perfected through practice as if it was a meditation process, imprinting his seal on it.

Perhaps, that is why he has chosen it as his material, or perhaps they have chosen each other, feeling that in origin, they both share a structure similar to a diamond, and a hardness almost as strong.

His human and artistic nature are extraordinary, both filling the holes created with their equivalents of black and white, minim and crotchet, creating repeated works over and over again, but never the same, and only comparable with that mantra turning him into an elevated engraver who elevates anyone looking at him.